Last week we had a small amount of snowfall in Western Pennsylvania.  The fresh snowfall was a good opportunity to go shoot timelapses since scenery is so much more pretty after a fresh snowfall and the amount of snow wasn’t too much to prevent us from driving to great spots.  We went to Fallingwater PA (where the Frank Lloyd house is built) and Ohiopyle State Park.  Both waterfalls were within 10 minutes of each other and in the Laurel Highland region of Pennsylvania which is about 90 minutes from Pittsburgh.

The first location was at Fallingwater where the snow was falling down pretty steadily for a half hour or so in the afternoon.  After the snow ended, we went to the waterfall upstream of the house and I set up the Syrp Genie Mini with a darkened UV filter to get a decently long exposure (near a half second at 0.4 seconds).  I usually find that longer exposures (above 1 second) don’t show much movement in the waterfall since the streams are pretty static with a long exposure.  Therefore, I try to target about a half second. 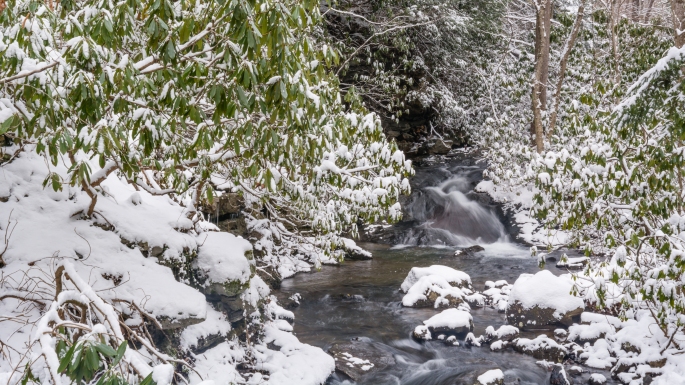 My other camera settings were manual exposure at f/20 and ISO 200 using my 28 mm f.2/8 prime lens.  I slightly underexposed the image because the sun was moving in and out a bit and I didn’t want to blow out the scene when it was lit by the sun.  MY Syrp Genie Mini was set with a 4 second interval to allow enough time for rotation.  I ended up using a 9 degree rotation in 373 images which is about 0.5-0.6 degrees per second of video.  I try and stay below 1 degree per second of rotation to ensure the video can be enjoyed.  I find that faster rotations just pan too quickly to enjoy a slow exposure timelapse.

The second video is from Ohiopyle State Park which has an accessible waterfall.  The river was flowing real strong and with the fresh snowfall it had some beautiful surroundings.  Again, I ended up using a 0.5 second interval at f/22 and ISO 100 in Manual Exposure.  I did not use a panning motion here since my 28 mm lens had the waterfall framed pretty well for the timelapse.  The slow zooming was done in post editing with Adobe After Effects keyframes to provide slow motion into the waterfall.  The video turned out really well with the waterfall and if you notice there are two people waking along the river on the far side of the image that gives some scale!  Really cool! 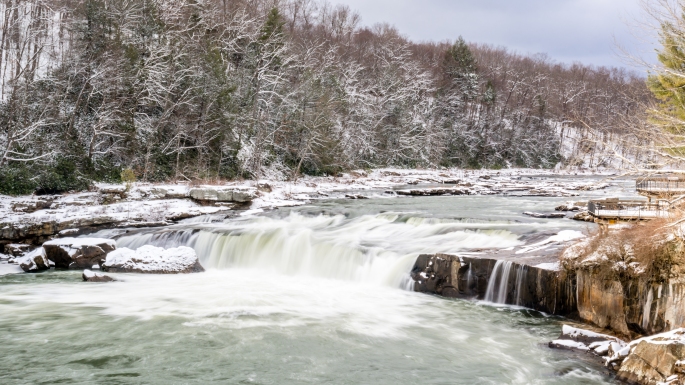