Well it’s been a difficult day shooting in Tokyo considering its been pouring rain all day!  But on the plus side…I have some time to do a blog post.  Japan has been amazing and incredibly busy.  I started with four days in Kyoto and then two in Osaka.   I arrived in Tokyo last night for a few more days.  I’ve had the chance to shoot plenty of timelapses which I will make sure to compile into a video soon enough.  I’ll be off for Mt. Fuji early tomorrow morning (woot! woot!) so I just wanted to write about my first Tokyo timelapse from last night.

I went to the Tokyo Municipal Government Building hoping to shoot a sunset but the clouds weren’t favorable.  Nevertheless there was still some color and lots of cloud movement.  The building is actually one of the free observatories you will probably find.  50+ stories above Tokyo the observatory gave stunning views 360 degrees around Tokyo.  The only downside is….windows and reflections of course.  You wouldn’t want to be that high without some barrier I guess!  Anyways to shoot this timelapse I found a quieter spot on the floor looking west for the sunset.  I didn’t use a tripod but instead a few objects from my camera bag (a memory card holder and my Syrp Genie Mini case) to hold the camera steady.  I also set up my camera bag right up against my camera to make sure any reflections were blocked from the inside so it would not look like I was shooting through a window.  See image below of my set-up.  This worked pretty well! 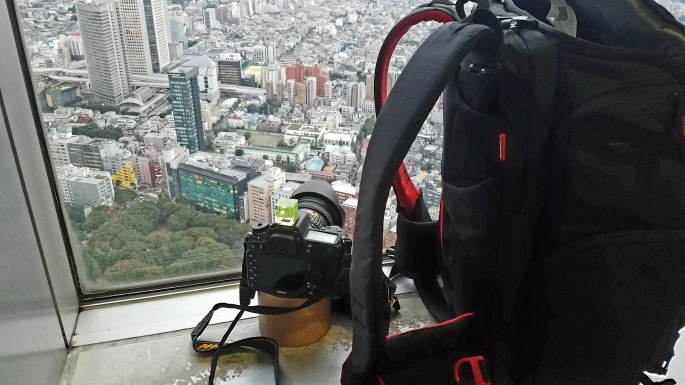 I got there about 45 minutes before sunset which is incredibly early here (4:51 PM).  I decided to try a day-to-night timelapse by increasing shutter speed during the sequence.  My aperture was set at f/10 with ISO 400.  My intervals were 18 seconds to allow for 15 second shutter speeds which is typical in dark settings with a low ISO.  My first photo was at 1/100 second and my last photo was at 15 seconds. 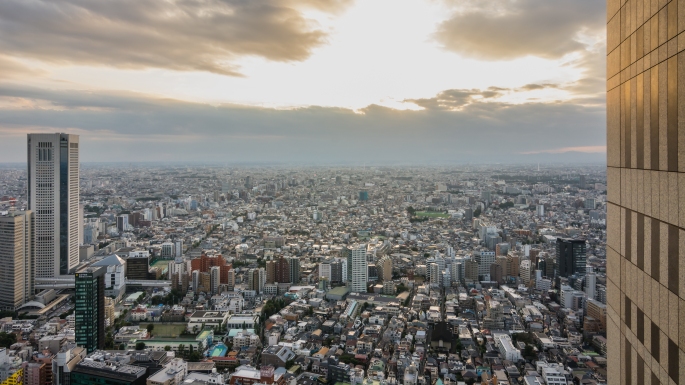 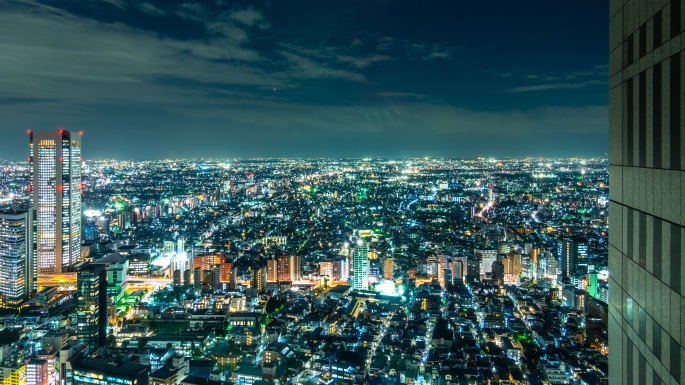 The shot sequence was working really well until the end when the high shutter speeds really found any reflection off the glass it could.  My camera bag was black (which is what you need) but had a red stripe that appeared about 10 seconds of exposure.  I decided to try and cover this with my arm with a grey sleeve but this was of course picked up too!  Lesson learned: carry some black cloth with you when you are shooting through windows which is almost always the case for city observatories.

Once finished I edited this with LRTimelapse and since the red stripe and glare were at the end I decided to zoom into the city during the sequence by creating keyframes in Adobe After Effects for zoom and position.  This ends up hiding some of the glare which appears at the top of the frame towards the end of the sequence.  The glare is barley noticeable now and the zooming has a pretty cool cinematic effect.  So a win-win!

Please let me know if you have any questions.  Thanks for reading!  Look for some more Japan posts in the next days and weeks!